For more information, or to join Theatre Sarnia, visit our webpage at TheatreSarnia.org 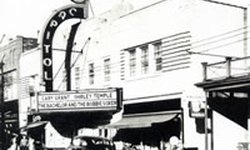 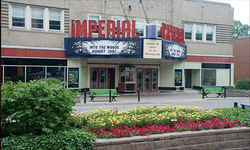 Over 20 Years ago the Capitol movie theatre was transformed into the Imperial Theatre by Theatre Sarnia.

Originally built as The Capitol Movie Theatre in 1936, the Capitol was lovingly restored between 1995 and 1997, in all of its Art Deco elegance, as indicated in the pictures of the foyer. It was transformed from the premiere movie-house of the 1930s to 1980s to a modern theatre for live performances and renamed the Imperial Theatre. Every seat in the house provides an excellent view of the stage. In fact, no seat is more than sixty feet from the stage. The acoustics are great. However, we have installed an infra-red hearing impaired system with loan-out devices for patrons who request them. We also have street level wheelchair access from the Theatre foyer to an accessibility suite specially designed for patrons with mobility issues. 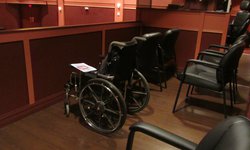 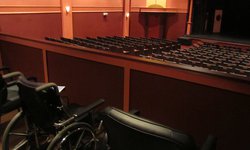 If that's not enough, there's more — The Imperial Theatre is located right in the heart of downtown Sarnia, just minutes away from anything and everything a traveler could need. Numerous restaurants and shops line the nearby streets, happily awaiting your patronage.

Amateur Theatre in Sarnia grew through the leadership of Herman Voaden, Dr. R.K.Stratford and D. Park Jamieson with the creation of the Drama Club of Sarnia in 1927. After many years known as the Sarnia Little Theatre the organization is now known as Theatre Sarnia and it is one of the oldest, continuously operating theatre groups in Canada and one ot the few that actually own their theatre . As of November 30, 2016 the Imperial Theatre became mortgage free - a testament to the vision of the original conversion steering  committee. Over the years, this group has performed in a Lutheran Church, the auditorium at Johnson Memorial School, the Sarnia Public Library auditorium, Sarnia Collegiate Institute auditorium, and the original Imperial Theatre, further North on Christina Street that was destroyed in the tornado that hit Sarnia in 1953.

Theatre Sarnia now has it's home at the Imperial Theatre in downtown Sarnia, which was officially opened on December 31, 1996. The theatre originally opened as the Capitol Theatre on New Year's Eve 1936 with the movie College Holiday starring Jack Benny. It closed 52 years later in 1988, and was left abandoned and derelict for 10 years and slated for demolition. In two short years, with the help of local Industry, a loan from the City of Sarnia...since repaid in full, and private donors, Theatre Sarnia members and many volunteers accomplished the transformation of the movie house to a live theatre venue. Now restored in all it's Art Deco elegance, the Imperial Theatre showcases Theatre Sarnia productions and also actively hosts a variety of professional and local community groups providing a wide spectrum of entertainment. The Imperial Theatre is noted for its' technical excellence and is recognised as a first class performance venue by local and national artists, together with friendly, helpful Technical and Administrative staff.

The Imperial Theatre is wholly owned and operated by Theatre Sarnia, a Not-for-Profit Charitable Corporation, under the governance of an elected Board of Directors. Over the years the group has hosted successful Theatre Festivals such as the Dominion Drama Festival, the Theatre Ontario Festival and the Western Ontario Drama League Theatre Festival and WODL Mini-Fest. The theatre group has won many awards and had their work nominated for recognition at these Festivals. Graduates of Theatre Sarnia have gone on to careers in various fields of the theatrical community and entertainment industry.

A glance at our coming events schedule will indicate the diverse nature of performances on the stage of the Imperial Theatre... from drama, comedy and musical theatre, from classical music, jazz and rock music... this theatre has it all!

The Imperial Theatre also houses the R. W. Lawton Gallery that hosts rotating displays by local Artists. The gallery provides an excellent meeting place before shows and during intermissions. Licensed bars are located in the Gallery on the main floor and in the Balcony lounge. A pre-ordering service is available to allow your drinks to be waiting for you at Intermission. Special care has been taken to apply the same Art Deco elegance that surrounds the Imperial to both bar areas. Indeed, as a nod to local heritage, the main floor Capitol bar is highlighted with letters from the original Capitol Theatre marquee and the balcony Lounge bar contains a curved section that was originally located at the Sarnia Armouries. 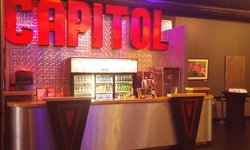 The Accomplishments of Theatre Sarnia

Theatre Sarnia has won more than its share of awards, and on a number of occasions have represented Sarnia and WODL at the Theatre Ontario Festival winning the top award twice. In 1995, our production of The Melville Boys was judged the best production in all of Western Ontario. It went to the Theatre Ontario Festival at the Ford Centre for the Performing Arts in North York, where it won "Best Play" in Ontario. In April 2009, our production of Night Sky won the D.Park Jamieson Memorial Award for the best production in Western Ontario at the WODL Festival in Woodstock.

In March 2015 our production of The Clean House won the award for the best production in Western Ontario at the WODL Festival in Owen Sound and moved on to the Theatre Ontario Festival in Oshawa held in May where it was recognized as the winning outstanding Festival production...the best in Ontario !

In March 2019 our production of Girls Like That won the award for the Best Production in Western Ontario at the WODL Festival in Guelph, together with a series of awards for Best Visual Production, Outstanding Technical Achievement, Outstanding Ensemble Work, Best Sound Design by Henri Canino, Best Complex Choreography by Jacqueline McKenzie, Best Projections by Ian Alexander and Oustanding Direction by Henri Canino. The number of awards given to this production attest to the depth of theatre talent within Theatre Sarnia.

Over the years members of Theatre Sarnia have won many other awards for acting, directing, stage managing, ensemble playing, make-up, lighting, sound design, set design and creation of special costume pieces. Graduates of our theatre group have taken up many positions in various fields of the theatrical community. A partial list includes: